The MINI was not born in a vacuum. Its development stemmed from an international crisis. In July 1956, Egyptian president Gamal Abdel Nasser announced nationalization of the Suez Canal Company, until that point a joint British-French enterprise.

The British and French, in response, supported an Israeli invasion of Egypt in October, which they used as pretext to land troops to “protect” the canal from warring parties.

The resulting crisis and conflict—though resolved by March 1957—generated an acute oil crisis. Egypt and Middle Eastern powers closed or destroyed a number of oil pipelines across the Mediterranean, including a Syrian pipeline that provided 20 percent of British oil. For the near term, oil that reached the British Isles had to make the cumbersome journey around the Cape of Good Hope at the southern tip of Africa.

Oil shortages piqued demand for smaller, more fuel efficient vehicles in England. At the time, German bubble cars and the Volkswagen Beetle led the small-car market. The British Motor Company (BMC) responded with a three-year development process to create a domestic alternative. The result was the MINI, which first rolled out of factories to consumers in 1959.

The MINI offered a relatively spacious alternative to bubble cars and enjoyed better handling and overall performance, due in part to its front-wheel-drive system. Still, initial sales were tepid—blue-collar British consumers, though desperate for fuel efficiency, still equated size with prestige.

In 1961, a partnership with John Cooper of the Cooper car company raised the profile of the MINI with a more powerful version, known as the MINI Cooper.

The MINI brand was folded into BMW in 1994 when it acquired the Rover group of vehicles. BMW sold off parts of the acquisition but retained the MINI brand. Production on the MINI ended in 2000, after nearly 5.5 million sales, but the MINI returned in 2002 with a redesigned look to appeal to modern consumers.

WHAT YOU DON’T KNOW ABOUT THE MINI COOPER

SEE HOW IT COMPARES
So what do you get for that added investment? And how should you compare the MINI Cooper against competitors? That depends on what’s most important to you, but here’s a glimpse at how the MINI Cooper stacks up against the FIAT 500. 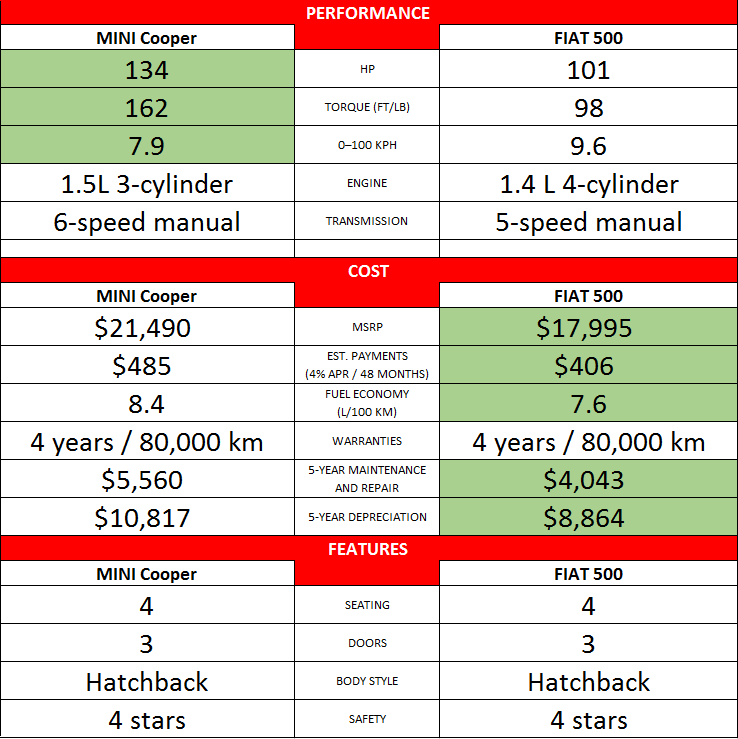 BE FULLY INFORMED
Purchasing a car is a major decision and a big financial investment. Take the time to learn everything you need to know to feel confident about the vehicle you purchase. Get all the details by browsing our inventory: